D&D has just turned 40 years old. Gary Gygax and Dave Arneson released the first ever published tabletop roleplaying game (RPG) on January 26th 1974. This means the game is roughly the same age as me. 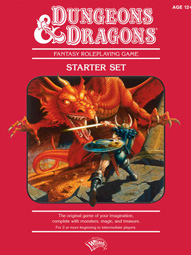 I first encountered D&D in late 1983 via the early magenta basic boxset (above). It was in the school library along with some boardgames. Within a few years this would have been impossible due to the scare stories of children dabbling in the occult due to playing. There certainly was a backlash from the mid 80’s to early 90’s, periodically I met people who equated D&D with Satanism (which was never the case). Eventually, familiarity and a lack of pentacles lessened the concern. Instead computer games have become the boogeyman of choice for parents of quieter kids.

Over a couple of lunchtime trips to the library, while waiting for my turn on the school BBC Micro computer (the whole school had just one computer) I perused the D&D books. I thought they were fantastic, but they needed a group to play and I didn’t know anyone else interested. So nothing happened.

Then the next year, I encountered another set in another school’s library, together with someone else reading them! With a couple of other interested kids we tried playing the contained adventure module, Keep on the Borderlands. It must have been a disaster, but I was hooked and asked my parents to give me a set for my birthday - they did. With a small group at school we started occasionally playing whatever modules we could lay our hand upon - starting with Keep on the Borderlands again (and not for the last time!). A few months later I went to the UK for two years. I didn’t find anyone interested in playing there so I just let my imagination run through the adventures I would be having if I did. When I returned I helped found the campaign and group I gamed with for the next 5 years.

I believe D&D (together with other RPGs) has been a unreservedly positive influence on my life. I can think of now downsides and many upsides: the fun, the friend, the hours of imagination and social interaction. Joining a local group is a great way of helping integrating yourself into a new city (I have moved country and city a number of times). Since coming to Kuala Lumpur a year ago, I have met many people through the local gaming group. So thanks Gary and Dave.